Highlights from the Philippines Trip from January 2016. 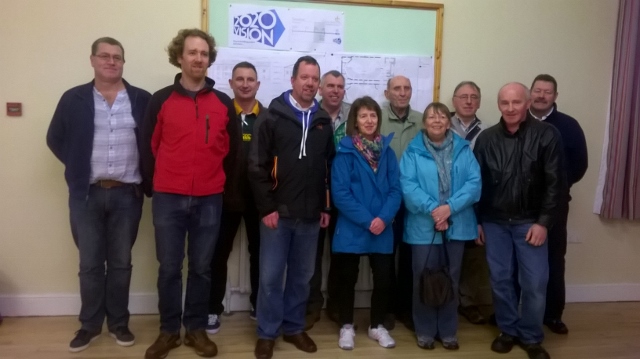 ​Give thanks that the team has arrived and had a restful day on Wednesday at the OMF centre in Davao and are now safely at their home for the next few weeks.
Pray for them as they settle into the work that God has prepared for them that they would keep healthy and safe while working.
Pray that they would be challenged by God as they serve Him in all that they do.

“Work had commenced prior to our arrival and we wanted to see just at what stage the building was at.
We then spent the rest of the afternoon shifting blocks about and deciding on the best plan of action for the rest of our stay here. It gets bright early here but it also gets dark early in the evenings.
There's no electricity on site however there is a small generator so we have light for the evenings.
After our evening meal and devotions it wasn't too long before bed was being considered so mattresses were arranged on the floor (girls have their own bedroom), mosquito nets put up and pretty soon everyone was asleep.
This morning started early to the sound of 2 loads of sand coming up the track in the dark shortly after 5.
It wasn't long before everybody was up and breakfast was being arranged.
We were on site for 07:00 and got a good days work done - a bit of digging, putting in stones for the base for the floor and discussing electricity supply options. We have been well looked after with plenty to eat and drink. It is very warm which can make work quite draining so we have decided and been advised that a little siesta after lunch would probably be a good idea.
Well we're all done for today, the sun is starting to set already and it'll soon be time for tea.”

Pictures attached. One picture shows the building that we are staying in, and the other picture shows a little of the landscape with the site in the background surrounded by sugar cane. 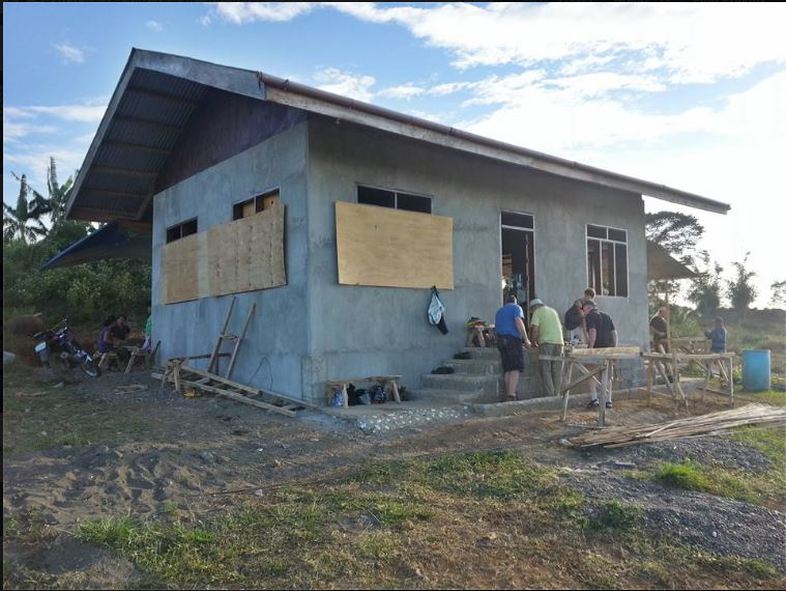 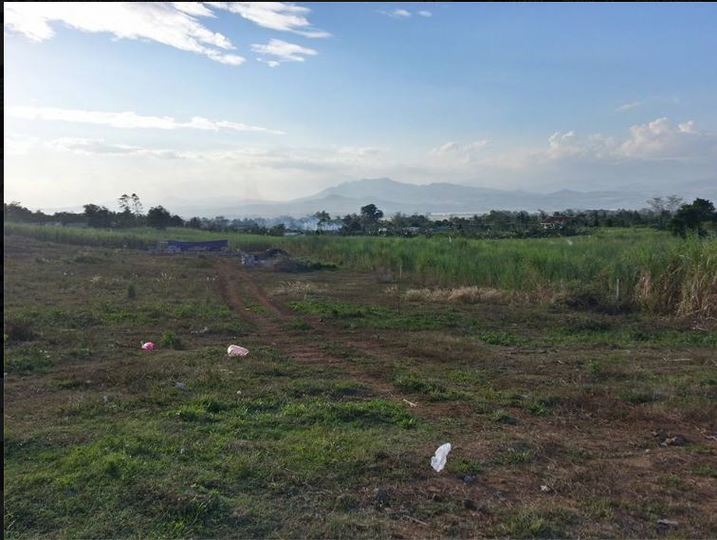 ​We all seem to be settling into the Philippines time zone now and consequently sleeping better at night.
On site too we are getting into the way of things and got a good days work done.
Alan led part of the team, along with help from a few Filipinos, in bringing electricity on site from a nearby house - using bamboo for poles as can be seen in the picture below.
The other major task today was filling up the floor with a gravel/stone mix.
The building is now ready to continue with block laying on Monday.
We continue to be well looked after and well fed and relationships within the team and with the Filipinos we are in contact with are good.
​Our working week is now over and we are looking forward to a day’s rest tomorrow. 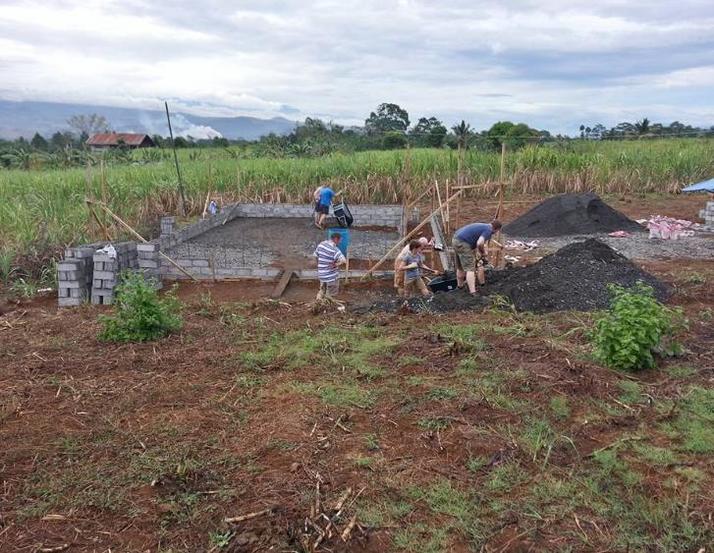 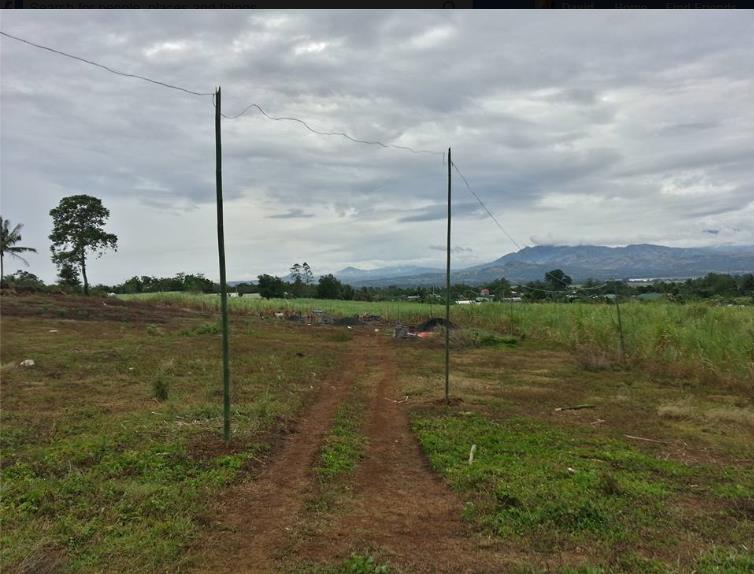 ​Not sure what happened to the end of my last email - after Jolly Bees we had a quick dander round the town before making our way up to a resort where we enjoyed a little time in a nice and cool pool. Then we returned back to the little place we are staying to discover we were going to be having pizza for tea thanks to the girls looking after us who brought it up from Valencia. After tea Ivan led us in evening devotions, shortly after which we heard a motorbike coming up the track and stopping outside our little place. David Thompson had just arrived. Tired but in good form we got him some pizza and something to drink. It wasn't too long after this that we were all crawling under the mosquito nets for the night after a good day in the Philippines.

Today was warm, very warm. Clear skies and direct sun didn't make it easy working on site. But we got to it and mixed a batch of mortar and started to lay blocks. Stephen Brownlee kept us right with the steel reinforcing as the building continued. So it went on the rest of the day everybody sharing jobs between block work and steel work. Soon the light was starting to fade and tea time was approaching and work finished for the day. A special treat awaited us for dessert after our main meal - ice cream! And with no freezer on site we had no choice but to eat it all up. After tea Ray led our devotions, then Stocker kept us all entertained with a game of "The priest of the parish has lost his hat" Beds are now being arranged for the night, while ones come and go out of the shower. Soon it will be lights out again, the end of another good day. 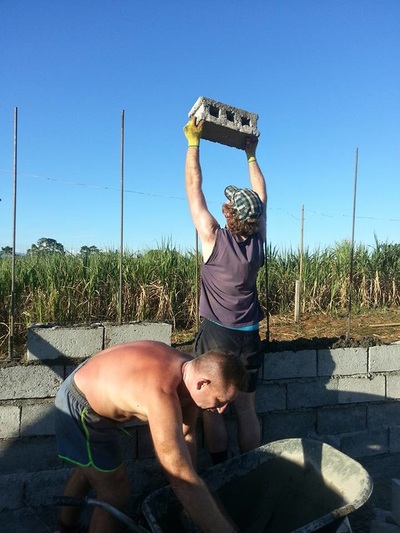 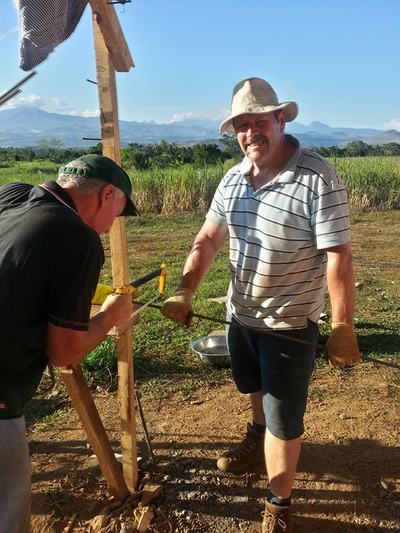 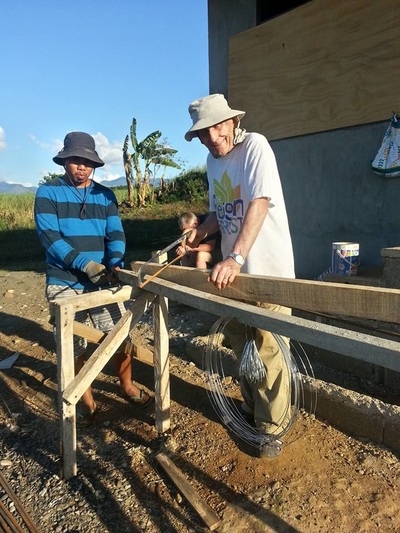 ​It was more of the same on site today, albeit a bit more overcast and breezy making the weather a little easier to work in. Building and steel work have continued as yesterday. The building has reached window height and is beginning to take shape.

Heather has ended up less busy than she envisaged, and together with Jocelyn has organised a couple of meetings in the church every day. In the mornings they have been meeting with women having devotional times and also teaching a little crochet. In the afternoons they have organised meetings for children where they have been singing choruses, playing games and learning memory verses. Due to other events happening in the village there were no meetings today so Heather and Jocelyn were able to spend some time teaching crochet to a couple of the ladies who are looking after us.

We have just finished devotional time with Hugh, including a praise time during which Isaac has been playing guitar while we sang. And once more its time to start thinking about bed. 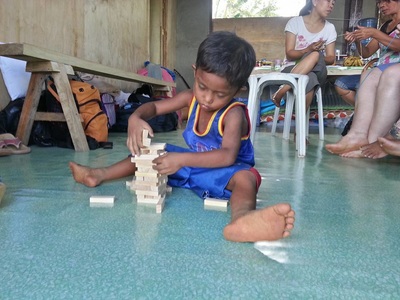 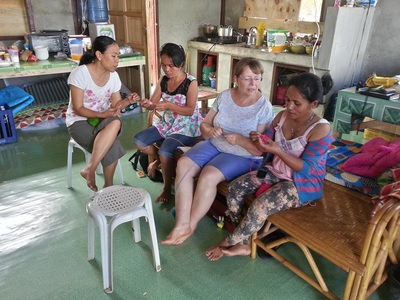 It's Saturday afternoon and we have finished work slightly earlier today. It has been a busy few days, and the sun has been relentless, leaving us all a little tired, glad the working week is over and looking forward to a day of rest tomorrow.

All of a sudden it seems, our trip is past the halfway mark, and there's still plenty to do. So we have been busy, and I'm afraid I've had little time for email updates. But I'll try and summarise the past few days. Building work has continued steadily and the building is now level with the top of the windows. The other building the Filipinos are working on is approaching the bottom of the windows. Stephen has been busy working on door frames. Hugh and I have had to do a slight redesign on the roof, and recalculate roofing materials required. Isaac and I have been out shopping for roofing materials a couple of times (and grabbing a quick McDonald's - but don't tell anyone) Heather and Liz were in Valencia this morning with Dayang shopping for supplies of a different nature. And currently Stephen is away with Isaac looking for timber with which to construct window frames. A Jeepnee is the usual means of transport into town, however to get down to the main road often involves a ride on a motor bike - much to the amusement of everyone watching.

So we've had a good week. Busy and warm and tiring but good. We continue to be well looked after (any hopes of losing weight have long been given up on) and have enjoyed good devotion times, often joined by Dayang and Isaac.

The sun is starting to set and there's a nice cool breeze blowing. Its a lovely time of day and we all enjoy the cooler temperatures the evenings bring. Tea is almost ready, and the evening will soon slip in, and another day of our trip will be over. 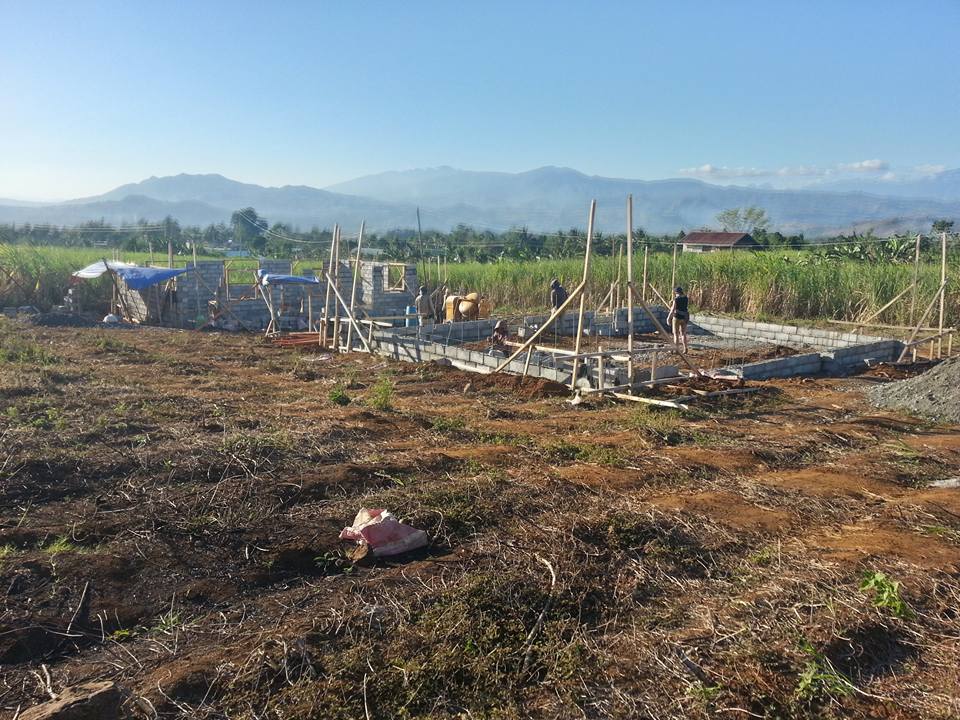 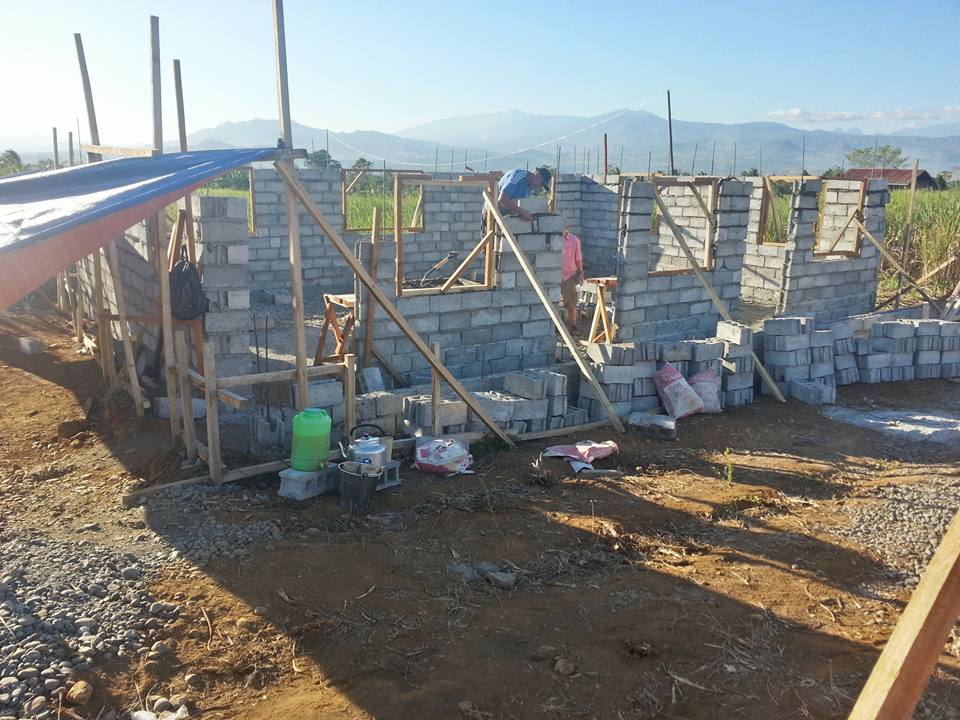 It's been a busy couple of days on site again. Monday was a very bright and warm day, today was a bit more overcast and breezy, making it a little nicer to work in. The building is continuing to take shape as we close over the window openings. We are also working on a few 'footery' bits along the walkway at the front of the building, which are proving to be rather time consuming. Stephen meanwhile is waiting for timber to arrive to make window frames. The other building, or 'Dorm 2' as it is now known, being built by the Filipino team, is also coming on well. Though not quite as far on as ours, it does mean we are able to assist them with solutions to any issues we may have had. On Sunday, Grace Moron came up to join with us, and will stay with us all week, traveling back to Davao with us on Saturday. She gave us a presentation last night on her life and work in OMF which was very interesting. It's just gone 9 o'clock and I think I might be the only one still awake judging by the amount of snoring going on, so for now good night.
​ 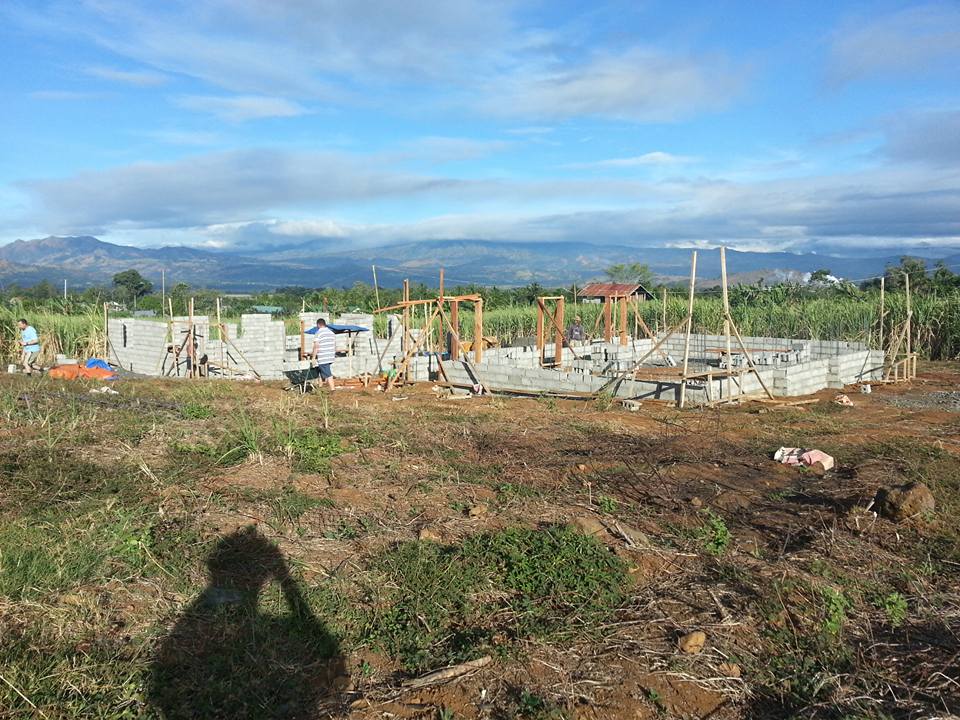 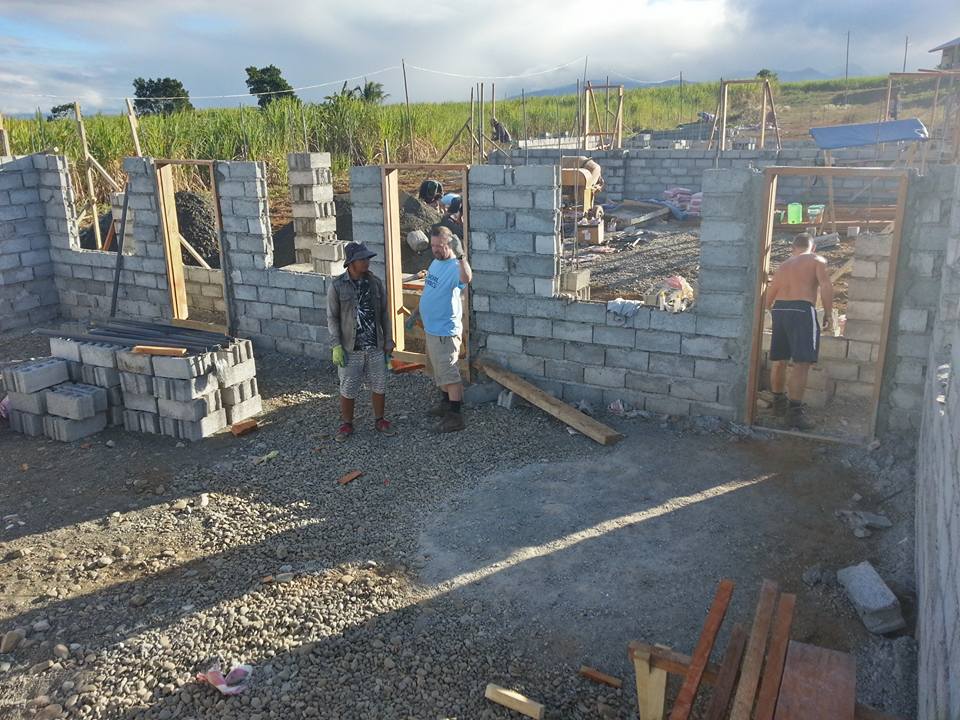 ​It's just after 04:30 and, having been in bed 7 - 8 hours, normally I'd be thinking of getting up, but the little biting insects are still about at this time of the morning so I think I'll stay under the mosquito net just a little while longer. I don't think anyone else from the team is up, however a couple of the Filipino ladies looking after us have been up for a while preparing breakfast as they usually do.
It was another warm day yesterday, skies were clear and the sun was strong, thankfully there was a nice breeze too. The building work continues and it’s at such a stage now that, if needed, you can find a little shade against a wall somewhere for a little relief from the sun.
We had another treat after lunch yesterday, Dayang had got us ice cream again, and it appeared just as siesta was starting but those who had gone to bed managed to get up again for some. Tea last night was spaghetti Bolognese, followed by 'Cupp Keyks', just another example of the variety of how well we've been looked after.
By the time we get in from work in the evening, have showers, tea and devotions, it’s never too long before we're thinking of bed again, and usually by 9:00 everybody's down for the night.
It's starting to get a little brighter, and breakfast is usually around 6:00 to allow us to start working at 7:00 so I'll maybe make a start at getting up, for what will be our final day of work here in the Philippines. 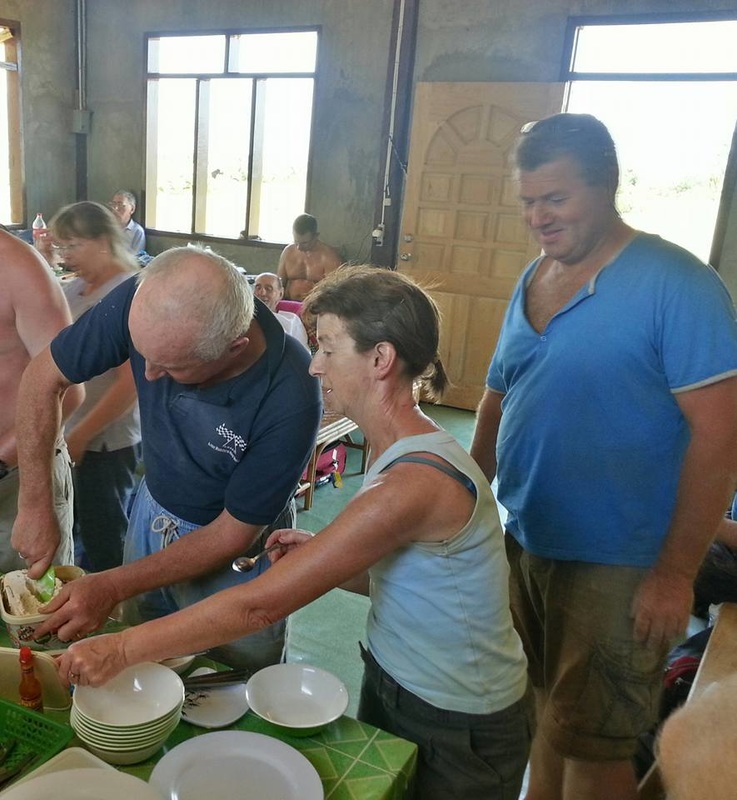 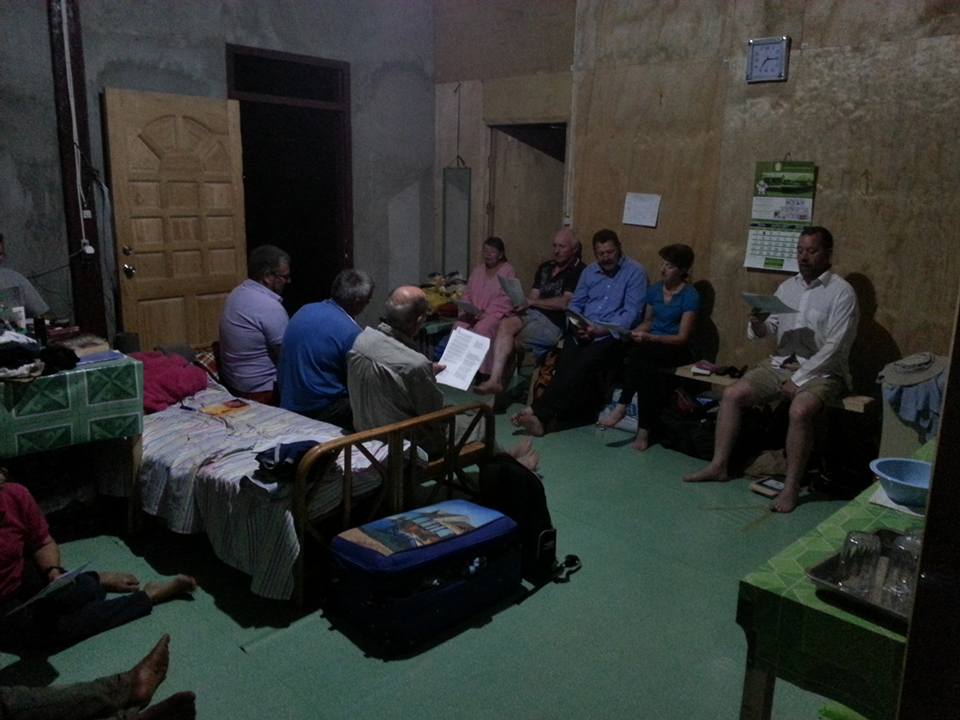 After a busy few days, we're all packed up and on the road, on the start of our return journey.Thursday was our last day on site, and we had a joint effort with the Filipino team to get the block work completed on our building. Thursday was also the last day for Heather and her women's and children's groups, with the children having a special party.
​Yesterday we had a day out to Lake Apo, in the hills outside Valencia. On our return we had a special evening and something of a feast together with OMF and MABCAM workers. It was a nice way to spend our final day with those who had become our friends in the place that had become our home over the past fortnight. 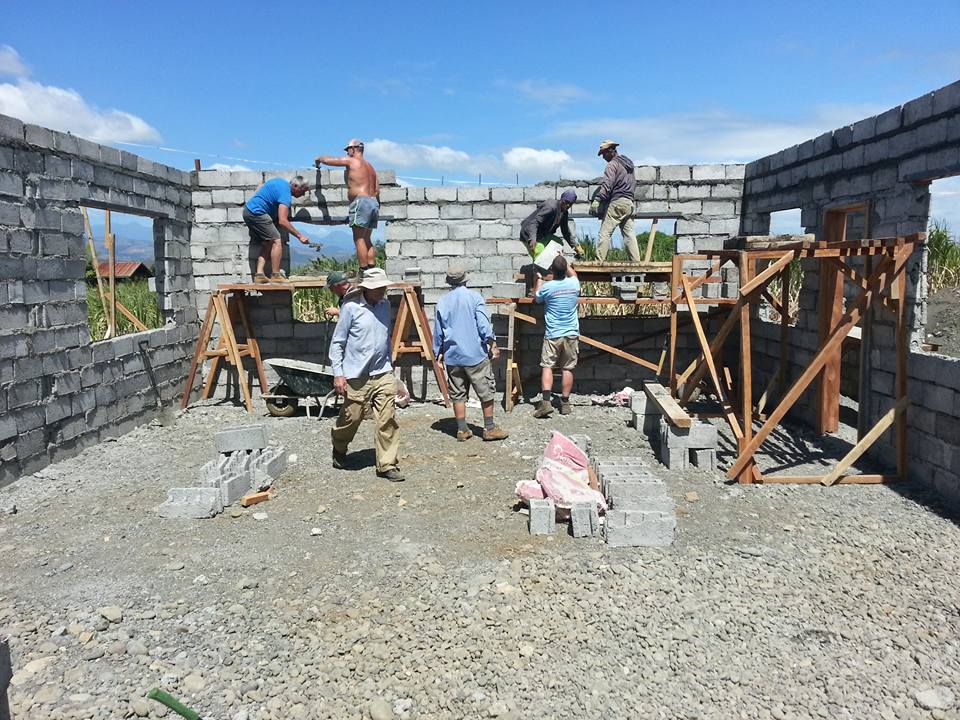 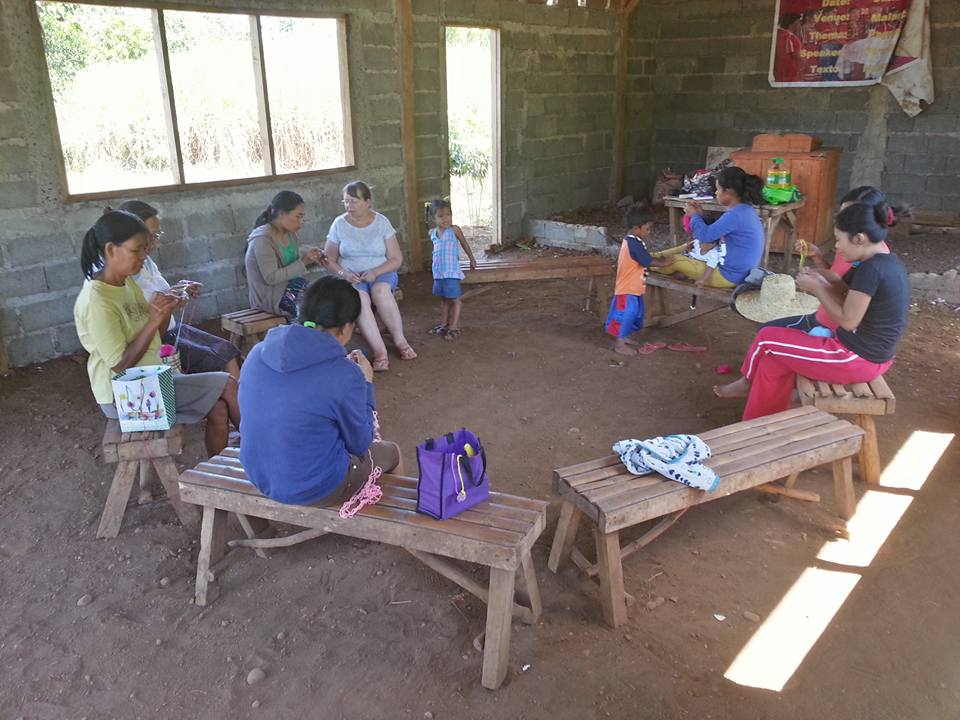 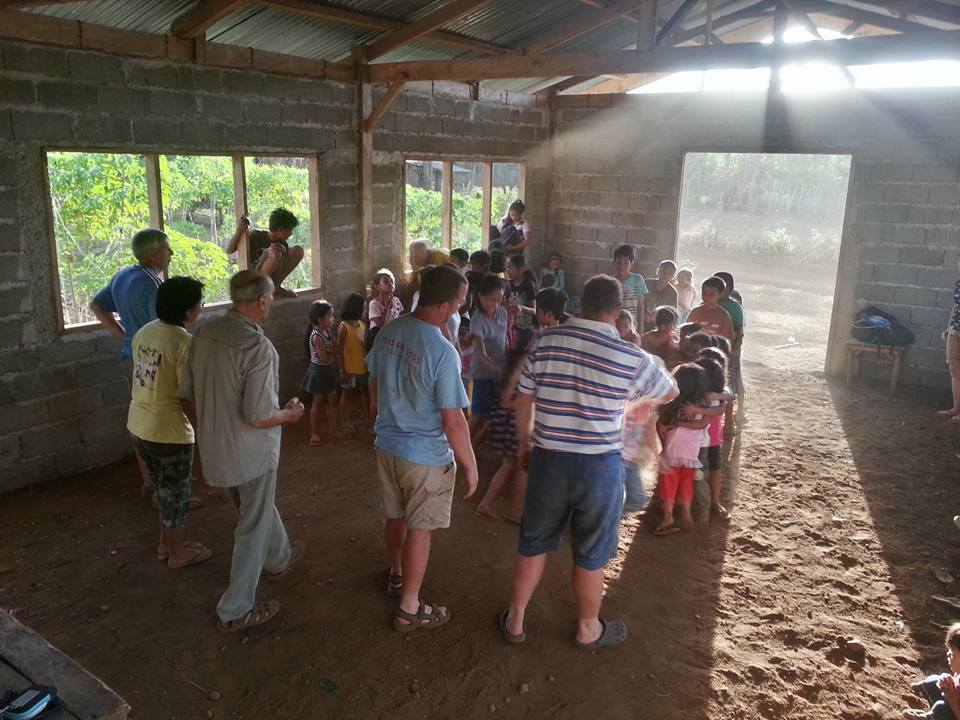 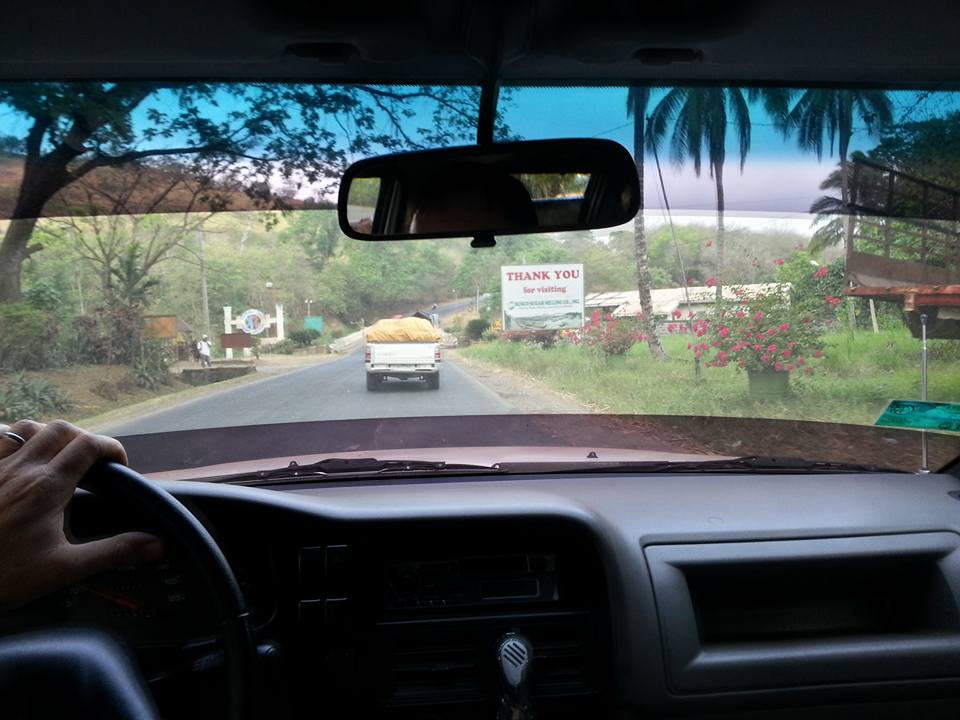